I have a presentation I sometimes give about Monopoly being a terrible game1. I usually end it by pointing the audience to Monopoly Deal, which I introduce it as “the only Monopoly edition you can enjoy”.

The advantages are obvious:

Even if you lose badly on luck, you’ve only lost 15 minutes. While it is better than Monopoly, that isn’t to say it is a well designed game (6.3 on BoardGameGeek).

The one major dent in the otherwise decent game is the “Deal Breaker” card, which breaks the game. I’ve house-ruled the game since forever to keep the card out of the game, since it breaks the most important rule of game design:

Games should be fun2

Deal Breaker stops people from doing that. How? Read on. 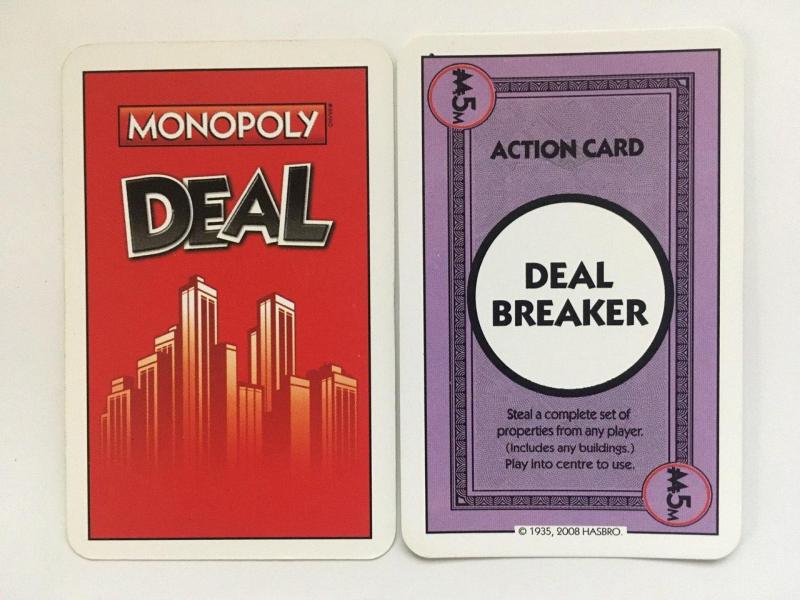 A lot of metagaming discussion with friends resulted in the following observations:

If you are playing a game with the Deal Breaker card, you’d want to save it till the very end, and win the game with it. The only possible case for not winning is the other player having a “Just Say No” card, and playing it on the Deal Breaker to negate your move.

Ergo, the metagame converges to the following:

There are 2 Deal Breakers, and 3 Just Say Nos in the game. However, considering a single Deal Breaker is enough to win the game, and the chances of you getting a second of either card are fairly small - both the Deal Breaker and Just Say No cards will end up getting hoarded for the endgame.

What this results in is something that breaks the fundamental rule of game design:

Players are disincentivized from playing the Just Say No card.

As any Exploding Kittens player can confirm, playing a Just Say No card is one of the coolest moves in the game. It lets you stick it to the player who dares ask you for 8M3 rent. It lets you pretend you’re counting your money, and then pull out a trump card and feel awesome! By disincentivizing players from playing the coolest card in the game, the Deal Breaker card makes things less fun. And that breaks our “rule of fun”.

In fact, the mere existence of a Deal Breaker card changes the equation. Note that there may be cases where you lose with a Just Say No card because you were hoarding it for the eventual Deal Breaker (which might never come). Someone asks you for 4M rent, and you have to pay up despite having a Just Say No card, because you must save the damn card for when someone steals your set. There are a few rare exceptions, but the Deal Breaker creates too many plays where not playing the Just Say No is indeed the correct move.

So here is the more interesting corollary observation:

The mere existence of the Deal Breaker card breaks the game by making the Just Say No card unplayable and worthless.4

Hence, if you’re playing Monopoly Deal, please house-rule the Deal Breaker card and make it easier for everyone. Two easy ways are:

Published on June 24, 2020 in boardgames,monopoly-deal