I run a non-standard Kindle configuration:

Since I don’t do any of these often enough to automate it, this is a self guide to help me follow these steps the next time I have to do any of this. No guarantees of this being helpful to anyone else but me.

The lifehacker guide on how to jailbreak your kindle is a good starting point [archived]. The mobileread forums have the definitive guides. Also see this FAQ on the mobileread wiki.

(Most of these only cover modern paperwhite kindles)

Sometimes, Kindle firmware updates will stop the Jailbreak. Search for your firmware on mobileread forums. See this link for the 5.8 series.

Once you have a jailbreak, the rest is mostly installing packages via MRPI. I keep a ready directory of packages I can copy as-is to my Kindle. The current listing is at https://paste.ubuntu.com/p/CXS5hYZdqc/ with most of it just being koreader.

The primary 2 packages are:

Run ;log mrpi via search after copying them to re-install them if needed.

You should download the kindle5-linux-gnueabi package for modern Paperwhites. Unzip it to the copy directory mentioned above.

Aside: koreader has a linux appimage version for desktops, which I package for AUR.

DRM is inherently bad for users. If I switch my Ebook reader from Kindle (which are great as of today) to a Kobo tomorrow, I want my content to stay with me.

There are much better websites that explain the issues with DRM, so go visit: fckdrm.com, DefectiveByDesign.org, or EFF/drm.

The primary tool for stripping DRM from Kindle books is apprenticeharper’s DeDRM Repo which works as a Calibre Plugin. If you are running calibre with Python 3 (such as via the calibre-python3 package on Arch Linux) - you should install the DeDRM plugin from the python3 fork. Compress the DeDRM_plugin directory into a flat-zip file and use that in Calibre.

My current key is saved in pass:

Save it in a file, which you can import to Calibre.

If you don’t have the key or if the above isn’t valid, see this comment on r/ebooks [archived].

At the bottom-left of the plugin’s customization dialog, you will see a button labeled “Import Existing Keyfiles”. Use this button to import existing ‘.k4i’ key files. Key files might come from being exported from this plugin, or may have been generated using the kindlekey.pyw script running under Wine on Linux systems.

I once did some trickery on the kindlekey.pyw application to get it working on my system, but I didn’t take notes. If I ever do this again - AUTOMATE THIS.

Getting a copy of the encrypted book

There are multiple sources for you to try.

Stripping DRM for any medium is always a cat-and-mouse game. Amazon keeps changing the DRM format in every Kindle firmware update, which is why the recommended method is to use a known/older version of the Kindle for Mac/PC Application as your source.

I have a backup of my current Kindle files at http://ge.tt/75zk4Dv2 in case you need any of the files mentioned above. Checksums for the files are below, since ge.tt doesn’t believe in HTTPS:

Dealing with dead disks in a btrfs RAID1 array

tl;dr: Check your disk usage v/s RAID capacity to ensure that you can remove a disk before trying. If you can connect a new disk without removing the old one, run a btrfs replace - it is much faster.

My homeserver setup has a 4 disk setup:

The WD disk had been giving rising errors recently, and I was noticing hangs on the system as well:

I asked a question on r/archlinux and confirmed that it indeed a dead disk.

Ordered a new Seagate Barracuda 3TB the next day, but my peculiar setup caused me a lot of pain before I could remove the dead disk. The primary issue was with the limited number of SATA connectors I had (just 4). The original setup had /dev/sdb,/dev/sdc,/dev/sdd as the three RAID disks with /dev/sdb being the dying WD.

This is what all I tried:

Running a btrfs device delete and leting it run overnight. It gave an error after quite a long time that finally helped me figure out the problem:

The RAID array was 2.7TBx3 disks and I was storing roughly 2.98TB of data. To switch to a RAID1 setup with just 2 disks, I needed to delete some data. I ended up clearing out a few steam games (bye bye Witcher 3) and ran another btrfs device delete to resolve the issue.

If you are faced with a situation where you have to remove a device, but can’t do a live replace, here’s what you need:

As a retro, I posted a summary with the issues I faced on the btrfs mailing list

The UIDAI Resident Portal (with read access to entire Aadhaar Demographic data) is runing a vulnerable version of LifeRay software. It is running LifeRay 6.1, which was declared End-of-Life in Febrary 2016.

In fact the release is so old it does not even appear on the “Known Vulnerabilities” page on the LifeRay website; you have to go look at their Archived Vulnerabilities.

You can find a simple Proof of Concept for the XSS issue at resident.uidai.gov.in. 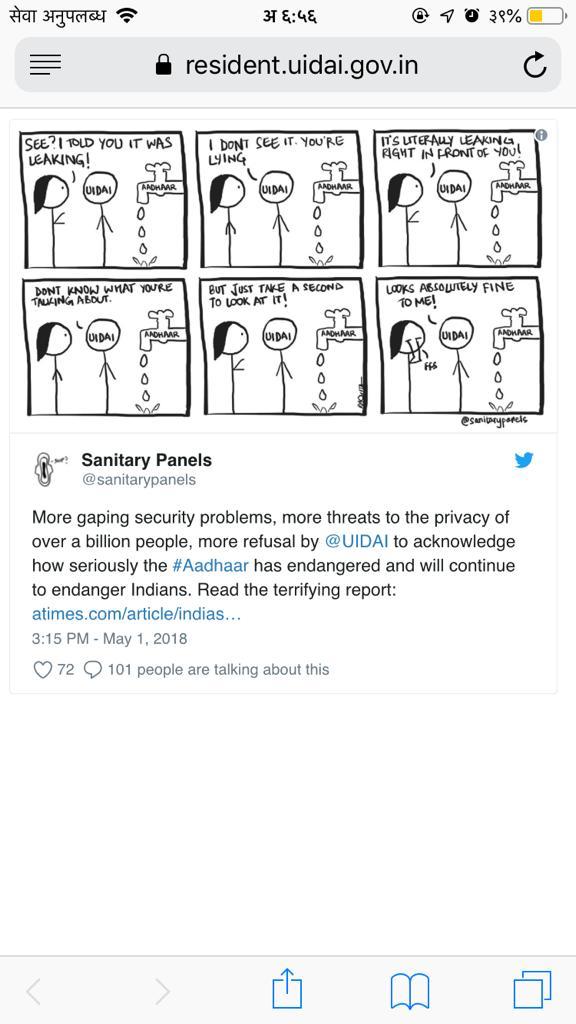 Breaking: Exclusive footage from inside @UIDAI's IT department after media reports of Aadhaar data leaks. pic.twitter.com/W7m9L0HvEX

I initially reported this to help@uidai.gov.in in Jan 2017:

Forgot all about it till Jan 2018, when someone mentioned I should try my luck with CERT-IN instead:

There is some confusion regarding which version of LifeRay is UIDAI running. They seem to be running 6.1.1, released in 2013-02-26.

The exact version is not relevant to the fact that UIDAI is:

0800 16-Sep: UIDAI seems to have patched the issue by putting a block on the cdn_host parameter. This still leaves them vulnerable to multiple vulnerabilities until they update to a supported release.

The vulnerability is still not fixed. Here is a complete timeline:

The only change that I’m aware of since my initial report is that the website stopped declaring the LifeRay version in a HTTP response Header.