Next in the Home Server series, this post documents how I got the networking setup to serve content publicly from my under-the-tv server. 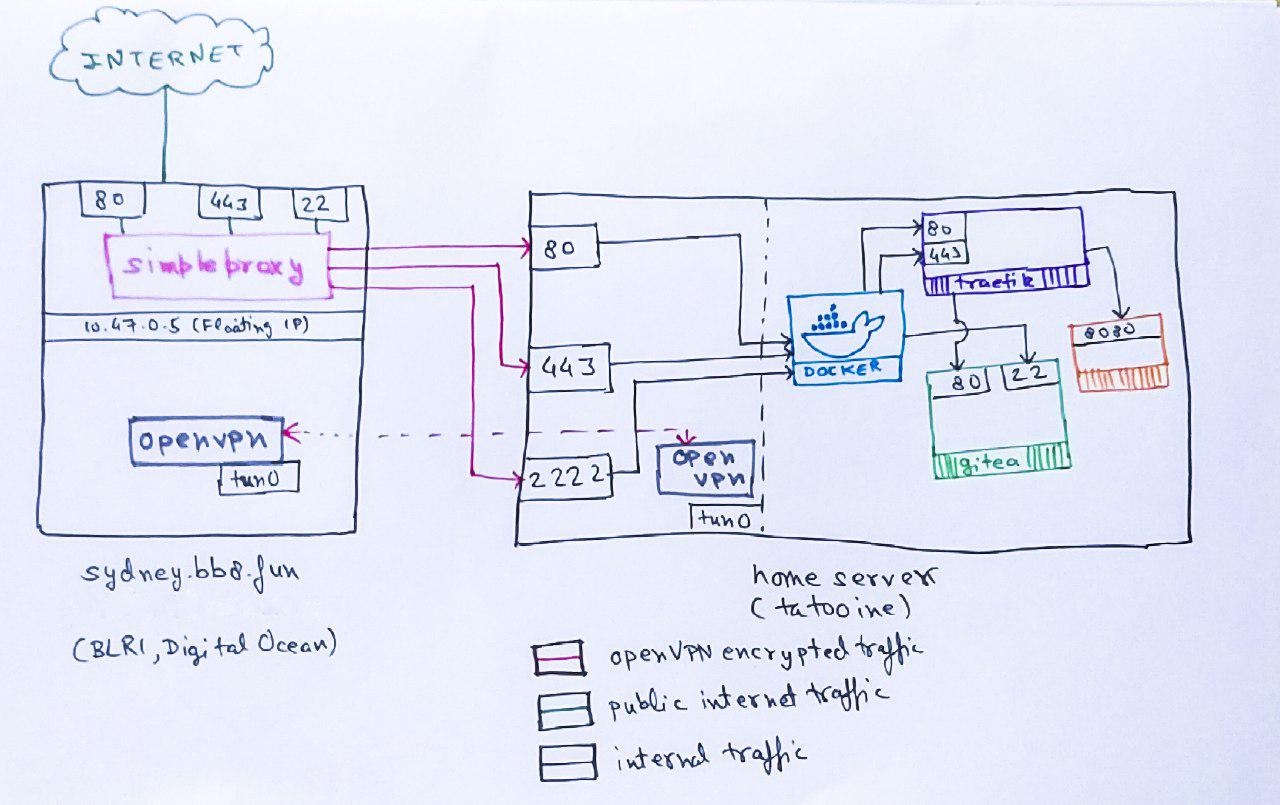 My home server runs on a mix of Docker/Traefik orchestrated via Terraform. The source code is at https://git.captnemo.in/nemo/nebula (self-hosted, dogfooding FTW!) if you wanna take a look.

The ISP is ACT Bangalore1. They offer decent bandwidth and I’ve been a customer long time.

In order to host content, you need a stable public IP. Unfortunately, ACT puts all of its customers in Bangalore behind a NAT 2. As a result, I decided to get a Floating IP from Digital Ocean 3.

The Static IP is attached to a cheap Digital Ocean Droplet (10$/mo). If you resolve bb8.fun, this is the IP you will get:

The droplet has a public static IP of it’s own as well: 139.59.22.234. The reason I picked a Floating IP is because DO gives them for free, and I can switch between instances later without worrying about it.

On the Digital Ocean infrastructure side, this IP is not directly attached to an interface on your droplet. Instead, DO uses something called “Anchor IP”:

Network traffic between a Floating IP and a Droplet flows through an anchor IP, which is an IP address aliased to the Droplet’s public network interface (eth0). You should bind any public services that you want to make highly available through a Floating IP to the anchor IP.

So, now my Droplet has 2 different IPs that I can use:

This doubles the number of services I can listen to. I could have (for eg) - 2 different webservers on both of these IPs.

The Digital Ocean Guide is a great resource if you ever have to do this. 2 specific IPs on the OpenVPN network are marked as static:

There are primarily 3 kinds of services that I like to run:

Docker runs its own internal network for services, and lets you “publish” these services by forwarding traffic from a given interface to them.

In plain docker-cli, this would be:

Since I use Terraform, it looks like the following for Traefik:

There are 3 “services” exposed by Traefik on 3 ports:

For all 3 of the above, Docker forwards traffic from both OpenVPN, as well as the home network. OpenVPN lets me access this from my laptop when I’m not at home, which is helpful for debugging issues. However, to keep the Admin Interface internal, it is not published to the internet.

The “bridge” between the Floating IP and the OpenVPN IP (both on the Digital Ocean droplet) is simpleproxy. It is a barely-maintained 200 line TCP-proxy. I picked it up because of its ease of use as a TCP Proxy. I specifically looked for a TCP Proxy because:

The simpleproxy configuration consists of a few systemd units:

I run 3 of these: 2 for HTTP/HTTPS, and another one for SSH.

While I use simpleproxy for its stability and simplicity, you could also use iptables to achieve the same result.

When I’m on the go, there are 3 different SSH services I might need:

My initial plan was:

Unfortunately, that didn’t work out well, because sshd doesn’t support listening on an Interface. I could have used the Public Droplet IP, but I didn’t like the idea.

The current setup instead involves:

The complete traefik configuration is also available if you wanna look at the entrypoints in detail.

You might have noticed that because traefik is listening on both eth0 and tun0, there is no guarantee of a “strictly internal” service via Traefik. Traefik just uses the Host headers in the request (or SNI) to determine the container to which it needs to forward the request. I use *.in.bb8.fun for internaly accessible services, and *.bb8.fun for public. But if someone decides to spoof the headers, they can access the Internal service.

Since I’m aware of the risk, I do not publish anything via traefik that I’m not comfortable putting on the internet. Only a couple of services are marked as “internal-also”, and are published on both. Services like Prometheus are not published via Traefik.

Running and managing 2 servers takes a bit more effort, and has more moving parts. But I use the droplet for other tasks as well (running my DNSCrypt Server, for eg).

Since SimpleProxy does not support the Proxy Protocol, both Traefik and Gitea/SSH servers don’t get informed about the original IP Address. I plan to fix that by switching to HAProxy TCP-mode.

Published on April 22, 2018 in home-server,Networking,VPN,ACT